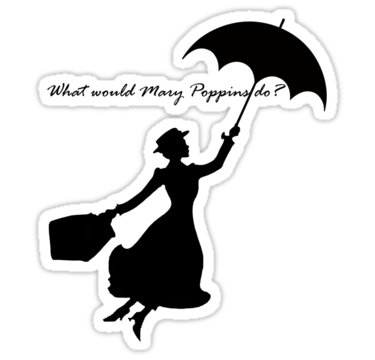 Mary Poppins was one of my favourite movies when I was a child.  My mother had taped it onto a VHS cassette from the tv and I would watch it over and over, rewinding all of the commercials using the clunky remote that was tethered to the VCR with a chewed up black cord.

I watched it so many times that I knew which commercial was the final one in the 3 minute line-up and could release the fast forward button and cease the whirring of the tape with such finesse it begs the question why I wasn’t any good with Nintendo games.

When my older boys reached 3 and 4 years old, I showed them my beloved Mary Poppins –  the high-tech DVD, commercial-free version – and I eagerly anticipated the end of the movie so we could break out in a Von Trapp-esque rendition of A Spoon Full of Sugar.

Admittedly, the boys’ reaction to the movie was a little lackluster.  They didn’t really understand how Mary had all of this magic power and the tuppence lady sort of scared them.

However, when Mirvish announced that the Broadway show, Mary Poppins was coming to Toronto, I immediately ordered tickets.

I love live theatre and sit in awe of the talent that goes into producing such spectacles.

Everything from the detailed costumes to the eye-catching sets and the lighting was phenomenal.  Not to mention that the actors performed each high-energy musical number with such gusto is was nearly impossible to keep from tapping my toes.

The play deviates somewhat from the original story.   The transformation of Mr. Banks and the push for good-old fashion family values is even more lauded than the original movie but works nonetheless.

Of course, Mary Poppins lived up to every expectation that I had.  Her quick wit, and dazzling personality were just as I remembered.

But perhaps the best part of the performance was when Mary opened her black umbrella, clutched her carpetbag in one hand and flew up to the balcony an arm’s length from the boys.  The look on their faces was well worth the price of the ticket.

They were finally enchanted by Mary’s magic.

If you’re wanting to see Mary Poppins in Toronto, you’d better do so soon!  Mary Poppins leaves town January 8, 2012.  If you live in the U.S.A., Australia or Mexico City be sure to check the official website for when Mary will be visiting your city.

Do you like the image?  It’s available as a sticker or a t-shirt at www.redbubble.com.  Check them out -lots of great gift ideas.