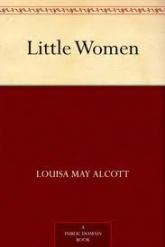 “Christmas won’t be Christmas without any presents,” grumbled Jo, lying on the rug.

“It’s so dreadful to be poor!” sighed Meg, looking down at her old dress.

“I don’t think it’s fair for some girls to have lots of pretty things, and other girls nothing at all,” added little Amy, an injured sniff.

“We’ve got Father and Mother and each other,” said Beth contentedly, from her corner.

It is in the first chapter of Little Women by Louisa May Alcott, when we are introduced to the four March sisters but it is on the second page we learn that these girls are anything but ordinary growing up in the midst of the American Civil War.

Sixteen-year-old Meg is fiercely dedicated to her family and over the years grows to emulate her feminist mother.  Fifteen-year-old Jo, proves her enviable mane of hair is easier to tame that she.  Quiet, shy and musically gifted Beth is the centre of the sisters’ world and Amy, artistically gifted, is the youngest of the March sisters who is destined to live a life of privilege from an early age.

That first Christmas that we spend with the March sisters we are privy to their innocent quarrels and we are permitted to eavesdrop as they gossip about the war efforts and the mysterious neighbour boy.

After performing their Christmas play for Marmee, the girls collapse into a fit of giggles and it is Beth who perfectly sums up why after more than a hundred years these March girls are still so endearing:

. . . Beth who nestled up to her mother and said, a little later, “How I wish Father were here.  I’m afraid he isn’t having such a merry Christmas as we are.”