My middle son turned 5 yesterday.  Where has the time gone?  It feels like yesterday that I walked into the hospital extremely pregnant and anxious.  I was overwhelmed at the idea of having two children close to 16 months apart but it felt like old hat walking into Labor and Delivery on April 01, 2008, like I had left but had forgotten something and was back for one more.

The triage nurse who admitted me couldn’t believe that I was about to have a baby.  She had pegged my bump at 7 months along and was shocked when I told her that I was starting my 39th week.

A few hours later our second little boy was born.  He came into the world with a shrill scream and furled in a tight ball.  It’s funny how in that exact moment that we met he showed me his true personality: a feisty homebody who likes to be surrounded by his comforts.

We mark birthdays in a big way at our house.  I love birthdays – an entire day dedicated to celebrating someone special.  My boys have parties with their friends that I gladly assume the responsibility of planning and an elaborate dinner with our large family is always a must.

My now 5 year old has strong ideas about his parties.  He knows exactly what he wants to eat, how he wants the house decorated and where the piñata will hang.  As early as three years old he would dictate the theme of the party and pitch-in with the planning and preparation.

Last year, our entire family descended on our house dressed as pirates and this year it will be ninjas.

Quick tip: do not Google “ninja costumes for women” with your child on your lap.  There will be a lot of stutters, back pedaling and frantic mouse clicking.

Pintrest has offered a wealth of inspiration but make no mistake, it can also make one feel pretty inadequate in a hurry.  We decided on a list of activities and games and of course, a cake.  I will bake the cake but I have had to talk myself down from some of the more lofty examples found on-line.  I know my limits and Martha Stewart, I am not.

This is my favourite ninja item that we have come across and it will be included in the loot bags. 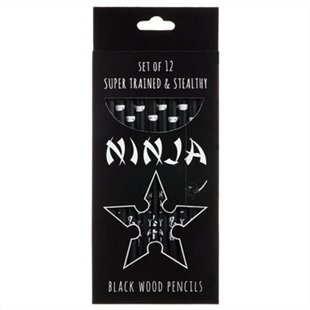 The back of the box reads:

Everybody was Kung-Fu writing,

Those words were fast as lightning.

In fact it was a little bit frightening,

But they wrote with expert timing…

How could I resist?

10 thoughts on “Everybody was Kung-Fu fighting!”