Nothing beats summer reading.  Whether you’re on a beach, under a tree at the park or just sitting on your front stoop, there is something peaceful about reading outside.  Here’s a list of some of the books we’ve read this summer. 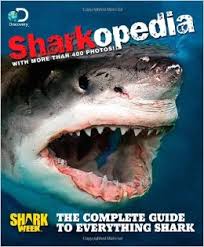 Sharkopedia: The Complete Guide to Everything Shark from Discovery Channel and Time Home Entertainment was waiting in our mailbox upon our return from our family vacation to Grand Cayman Island.  It was on this trip the boys discovered a love for marine life and the ocean.  This book has become a favourite in our house.  With more than 400 colourful photos and easy to read fast facts, the boys have become quite knowledgeable about sharks.  It’s an engaging book that would make a welcome addition to any home or classroom library.  I will be sure to keep my eye out for more books Discovery Channel and Time Home Entertainment as the style seems to hold the interest of my boys. 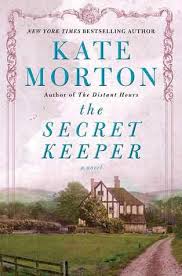 For the previous What We’re Reading, I wrote about The House At Riverton by Kate Morton, a book to get lost in.  I enjoyed this story so much that I followed it up by reading The Secret Keeper, also by Kate Morton.  It’s 1941 and London, England is in the midst of the Blitz.  Dorothy Smitham, a country girl is alone in the city after being disowned by her father for loving Jimmy.  Life is not easy for the lovers, Jimmy, a photographer documenting the atrocities of war and Dorothy an elderly lady’s care-giver.  Together they try to make a life in a city that is crumbling around them.  Fast forward through time and it is 1964 when Dorothy Smitham’s daughter Laurel witnesses a horrific crime that haunts her for years and has her begging her mother for answers more than thirty years later when Dorothy lays on her deathbed and is forced to relive her most darkest days in London at the start of World War two. 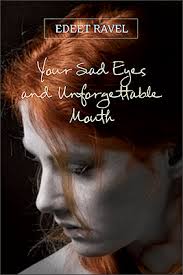 Your Sad Eyes and Unforgettable Mouth by Edeet Ravel – Years ago I read Ten Thousand Lovers and became a fan of Edeet Ravel’s writing.  Your Sad Eyes and Unforgettable Mouth confirmed my adoration.  This is a coming of age story, where we follow the lives of Maya and Rosie, two girls living in the suburbs of Montreal in the 1960’s who became fast friends.  Both Maya and Rosie are children of Holocaust survivors and as the story of their teen-age years unfold, we’re privy to how their parents each cope with the traumatic events that shaped their lives – and ultimately how the Holocaust continues to shape and define the generations following the war.  Ravel’s writing is captivating and her characters rich with flaws which makes them so interesting and relatable -this is the kind of book that lives in your mind for days after you’ve finished the final chapter.

Natalie Serber’s Shout Her Lovely Name was sent to us by her publisher, and I’m so glad it was!  I’m going to say this a lot about this month’s batch of books, but I could not put this book down.  A collection of mostly linked short stories about mothers and daughters, Serber’s book nails parenthood: its anxieties, its frustrations, its loneliness.  I was in thrall to the stories, and while each one stands alone exceptionally well, I loved seeing how the linked stories unfolded over generations.  It’s literary, clever, dark, funny, painful and beautifully written.  I loved it. 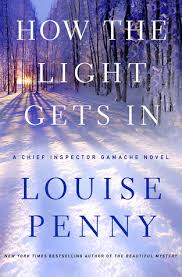 I’ve been waiting for this book all summer!  How the Light Gets In is the latest in Louise Penny’s Inspector Gamache mysteries, set in the fictional hamlet of Three Pines in Quebec.  I gobbled it up in a day.  Great stuff.   I had read four of the previous mysteries in a row, and, while each book has its own mystery, they read a bit like a soap opera with the returning characters.  I was dying to find out what happens next in the drama, and did she ever deliver!  It’s a whizz-banger of a book. 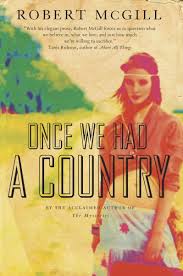 Robert McGill’s Once We Had a Country has been on my radar for a while.  It tells the story of American draft dodgers who come to Canada to set up a commune.  I was immediately drawn in by the characters, and by a quiet kind of menace in the narrative voice.  We know that the high hopes of the commune organizers cannot help but meet with disaster.  McGill has said he had wanted to write about the American migration to Canada from the point of view of the women and children who came with the male draft dodgers, and it is to the female protagonist Maggie that I felt most drawn.  Hers is a compelling tale, deftly told. 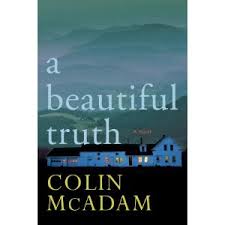 A Beautiful Truth, by Colin McAdam, is a novel about chimpanzees, how we mistreat them, how alike we are, and how our loneliness cripples us.  So many passages took my breath away.  I will be reading his other two novels as soon as I can get my hands on them.  It’s amazing how a narrator can know people in ways they can never know themselves. I have to say that my attention flagged in the early and middle chapters.  They are written from the chimps’ perspective, and I could not get away from the feeling that the narrative voice was a scientific one.  There was something always of a note of surveillance.  Anyway, a compelling, if sometimes difficult, read. 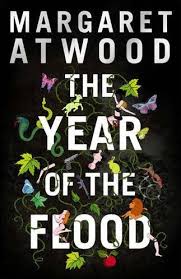 Finally, the big headliner of the fall book releases:  the final installment in Margaret Atwood’s dystopian MaddAddam trilogy.  It’s brilliant!  I re-read The Year of the Flood in one sitting the day before I settled in with the final book, and it was good to have that reminder of what had come before.  (There’s a helpful summary of both books at the beginning of MaddAddam, so it’s not necessary.)  I am no prude, but I did find that there is a fair amount of violence and coarse language, and I felt sometimes like it had gone a bit past what was required by the story.  Didn’t stop me from gobbling the book, though!  Atwood tells the future with a chilling and astute vision. 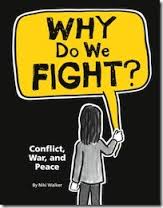 Why Do We Fight? by Niki Walker is a book aimed toward independently-reading older children, but I was happy to review it because I wanted to have a framework to discuss issues around conflict, small and global, with my kids as they get older.  This book does the trick, tracing conflicts from their beginnings and their possible sources, ways in which they get entrenched, and how they either resolve or get out of control.

Walker does a nice job of relating children back to their own day-to-day conflicts, to understand that tension around issues are inevitable, but especially to see that the fundamental nature of fighting isn’t foreign to us, even though their ultimate escalation can be.  In doing so, she necessarily highlights the importance of resolving our disagreements peacefully.  Clear for independent readers, and helpful for those of us working with little ones too. 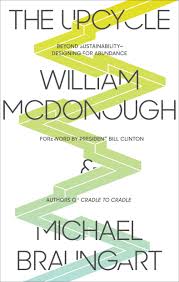 Cradle to Cradle by William McDonough and Michael Braungart

This is a staple of the green industry, and the basic premise is that most of our environmental problems are the result of poorly designed goods.  They discuss the difference between the current environmental premise, which is to minimize our adverse impacts on the earth, and the ultimate goal, which is to have good design where the creation and disposal of goods has a positive impact on the earth.  It’s a unique perspective on  what direction we need to take to reverse environmental degradation, as opposed to delaying it.  We are a very long way away from what they are proposing. 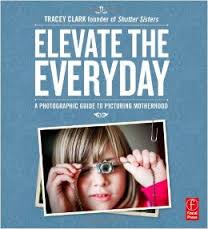 Elevating the Everyday by Tracey Clark

A fun and easy read about what I’m basically already doing, which is trying to take more and better photographs of my family in order to capture fleeting periods of our lives.  I personally feel a strong desire to document what’s happening, partly to make better sense of it, but especially when it comes to my kids, to remember it.  All time is fleeting, but the obvious signs of growing in our children makes this period of motherhood bittersweet, and Clark’s book focuses on just that in advocating for picking up the camera.  She also suggests strategies for taking better photos, and there is an unintimidating section on manual camera functions, which I will refer to in trying to learn more about my camera.

One important message I got from this book:  make sure you are in the pictures, rumples clothes and all.  For yourself and for your kids, to know that you were there with them as they grew.  This struck a chord with me; I am in few pics with my kids.  Clark says to run and figure out the self-timer on the camera, and I am going to do just that.

4 thoughts on “What We’re Reading”