Here are some of the best non-fiction books we’ve been sent this season: 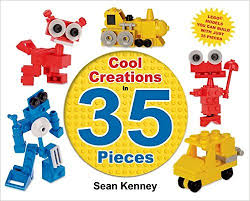 I cannot begin to describe the level of excitement in my five-year-old when he saw this book.  “Great!,” he said.  “I can’t wait for R to come home so he can build these for me!”  Ummmm.  The idea was supposed to be that he tackle some building on his own, which, I am happy to say, he soon did.  Sean Kenney has created 30 pages’ worth of robots and buildings and goofy faces and all manner of other things out of only 35 pieces of Lego.  When you have Lego bins that rival the size of the sofa, that is a welcome thing.  No more rummaging through thousands of pieces.  Once you have rummaged and found the 35 pieces he uses, you have hours of building at your finger tips.  Kenney’s book, published by Henry Holt, is inspiring for its versatility with a limited set of pieces, and will, hopefully, lead your little Lego-lovers to explore and create on their own once they’ve seen the variety that’s possible.  If you photograph their creations, you can add to his on-line gallery!

Big Book of Who: Football 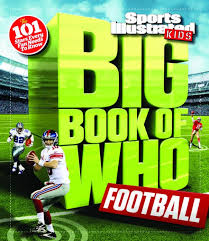 Published by Sports Illustrated Kids, a division of Time for Kids, this is a photo-saturated, fact-filled read for the football fan in your family.  There are five chunky chapters on Champions, Personalities, Record Breakers, Super Scorers and Yardage Kings, and the text is superimposed on photographs, appealing to visual learners.   My eldest son (12) scooped it up when I opened the mail, said “Cool!” and disappeared with it.  I know no higher sign of approval.  Football isn’t really even his thing.  This is one of those “flip through” rather than “sink into” books, but sometimes, that’s exactly how you want to pass the time.

Big Book of Why 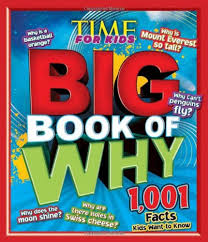 Also published by Time for Kids, and also photo-saturated, this book takes an inquiry-based approach to teaching.  Chapters are topic-based, and include Space, Technology, Arts & Media, and Transportation.  Each chapter is a series of questions: “Why are tomatoes really fruit?, Why are there so many kinds of apples?  Why do some pumpkins get so big?”  There is a focus on American data, though there are chapters on World History and World Culture.

Top 5 of Everything: Tallest, Tastiest, Fastest

This is the last of our offerings from Time for Kids.  It’s a smaller format, and a there is a lot less text in this one.  Strange but true facts are written in bold text on lush photographs.  This is a book that will appeal to the Guinness Book of World Records lover, and the facts are presented not only verbally, but with graphs, maps, charts and images.

Published by National Geographic, this book will appeal to younger readers in the early grades.  There is no clear organization to the material, so this is truly one of those books that you just dip into for fun.  Topics range from language to addresses to nature.  A group of owls is called a parliament of owls, Canada’s postal code for the North Pole is HOH OHO, some people hire goats to mow their lawns.  A fun collection of facts that becomes quickly addictive.  New Caledonian crows make right-handed and left-handed tools.  Barbie’s full name is Barbara Millicent Roberts.  I’ll stop now.

One thought on “New Kids’ Non-Fiction Books: Our Fall Haul”