SIMPLE: not hard to do; having few parts; not complex; not fancy; not special

Can we agree that motherhood has gotten complicated?

When I was a kid, cookie cutters were used for exactly one thing: cookies.  Now, Pinterest tells me seasonally appropriate cookie cutters should be an integral part of everyday lunch packing.  You know, because kids feel more loved when their carrots look like pandas.

As a child, I thought it was indulgent when a friend’s mom offered to cut the crust off my sandwich.  Now, there are sandwich cutters that not only remove the crust but transform humble PBJ into two long neck dinosaurs.

Speaking of long necks, when did we get so many types of dinosaurs?  When I was a kid, there were five:  T-rex, Triceratops, Stegosaurus, Pterodactyl, and Brachiosaurus. W hen did Ankylosaurus, Diplodocus, Iguanodon, Parasaurolophus, and Velocoraptor become household names?

There is plenty of blame to go around.  Pinterest, best-foot-forward Facebook updates and mommy blogs showcase thousands of ideas about how to be a craftier, more organized, hipper, better dressed, kinder, smarter, mother.

Mother is a word society has added a lot of baggage to.  It’s actually quite simple:

If you’ve got boobs and a baby, you are a mother.  And, chances are, you are doing a great job.

Admittedly, there is some small print that Webster’s definition omits.  Worry.  Stretch marks.  Sleep deprivation.  Unidentifiable grime on your clothing.  That stuff is just part of the female parent deal.  But, the other stuff – the Pinterest stuff – that’s something else.

If you are melting crayons on canvas for homemade nursery décor, you are a mother artist (noun: a person who creates art).  If it would be appropriate to refer to the contents of your kid’s lunchbox as a “foodscape,” you are a mother chef (noun: a professional cook).  If you ensure the floor is free of clothes, crumbs, toys and dust bunnies, you are a mother housekeeper (noun: a person whose job is to manage the cleaning).  You can be a mom and an artist or a mom and a bento-box goddess, but motherhood does not require such skills any more than it requires you to play the trombone.

A mother’s ability to love is not reduced by mass-market art on the walls.  Her ability to engage her children in meaningful meal-time conversations is not influenced by the shape of the vegetables on the plates.  Whether or not children become good grown-ups has nothing to do with the number of dust bunnies hiding under their dressers.

Let’s celebrate the creativity of our friends when they create original art.  Let’s admire the knife skills of those who make radishes look like flowers.  Let’s envy clean floors and empty laundry hampers at the neighbor’s house.  But, let’s not mistake those things for mothering. 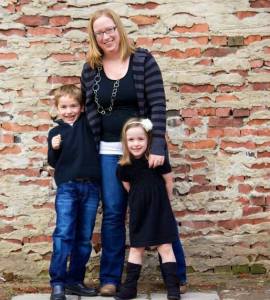 Be female and parent.

Let the carrots be carrots.

Kristina Cerise is a mother of two, and she blogs at Defining Motherhood.

22 thoughts on “Guest Post: Kristina Cerise: If It Ain’t Broke, Don’t Fix It”