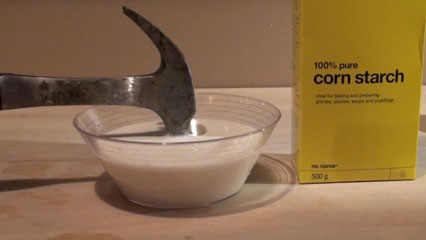 Here’s a slippery slimy activity to do with the kids for the month of April Fool’s: make a liquid that acts like a solid.

Non-Newtonian liquids are liquids that act like solids when pressure is applied to them, and you can make one with just two ingredients from your kitchen: water and corn starch.

food colouring (optional, add it to the water if you want a coloured mixture)

two plastic trays or baking trays with a lip

Begin by looking at how different liquids move.  Pour 1/4 cup of water from one container to another.  Pour 1/4 cup of molasses from one container to another.  Both are liquid, but water moves faster because it has a lower viscosity.  Ask kids to name the things in the house that act like water (vinegar, juice, milk) and the things that act like molasses (shampoo, ketchup, syrup).

Make your non-Newtonian substance by mixing 1 cup of corn starch with about 1/2 cup of water.  Gradually add the water to the corn starch until you have a mixture that pours like honey.  Pour this mixture from one container to another and observe how quickly it moves.  Is it more like water or molasses?

Ask kids to predict what will happen if they squeeze the mixture?  Will it run through your fingers?

Now scoop some of the mixture in your hands and squeeze it.  The harder you squeeze, the more solid the mixture becomes.  Force makes the liquid act like a solid.  Now stop squeezing.  What does the mixture do?

Pour enough water onto one of your trays to make a thin layer of water from edge to edge.  Ask kids to predict what will happen if you bang your hand onto the tray.  Splash!

Now do the same thing with the mixture on the second tray.  Will the mixture behave like the water?

Hit it and find out!  (There is a video here of the experiment if you want to see it before you try it in your own home!)

Experiment with different ways to exert force on the mixture: touch it softly, quickly, stir it slowly, hit it with the spoon.  You can even hit it with a hammer.

This can get a bit messy, especially if you are using food colouring, so be prepared to wipe up spills and splashes.  Also, DO NOT POUR YOUR MIXTURE DOWN THE DRAIN.   It will clog your pipes.  When you are done, scrape your mixture into the garbage for disposal.