Christmas hit this house like a tornado leaving in its wake a mess of wrapping paper, boxes and lots of new toys.   Before the holiday my boys purged their nest to make room for new loot and to give new life to their old favourites.  The boys readily donated their gently used toys to a local charity that was seeking donations.

The two weeks between Christmas and the return to school passed in a peaceful blur.  With no schedules dictating what to do, we enjoyed spending time together as a family and indulged in several pajama days playing with new toys, reading new books and over eating delicious food.

Some of our favourite gifts from the holiday:

Lego, Lego and more Lego . . . and some Playmobil too!

We spent several hours tediously arranging and re-arranging Lego and Playmobil sets.  The four-year-old has a vivid imagination and readily integrates the sets to create complex battles between swashbucklin’ pirates and the Queen’s knights.  It continues to amaze me how a set of plastic cubes can be the catalyst for learning about medieval history.  Together we spent many more hours thumbing through books about castles, catapults and cannons as well as searching Google for answers to the many, many questions that were sent my way about pirate life, scurvy and Egypt (because the natural transgression from Medieval life is mummies, tombs and pyramids!).

A gift from Nana, these Boogie Boards have seen lots of use since being unwrapped on Christmas Day.  The Boogie Board is an LCD writing tablet that erases with the click of a button.  The four-year-old practiced his printing while the 6-year-old played Xs and Os with any willing (and some not so willing) participant.  I wrote the boys a goodnight message on each of their boards that first night, and since then they have been asking for one every night.

I bought this book for my husband for Christmas – a fantastic cook who needs no help in the kitchen.  Tired of all the reality-based Food Network shows (where are you, Nigella?), we started watching Two Greedy Italians on TLN.  The pair criss-cross Italy, highlighting local fare that extends beyond spaghetti bolognese.  The beautifully photographed book makes a welcome addition to our collection of cookbooks (that I rarely use but love to admire). 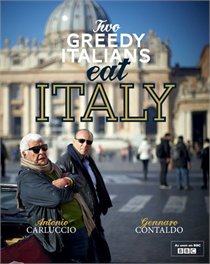 Remember the saying: the apple doesn’t fall far from the tree?  My two-year-old son lives up to my university nickname of “Monica” (the cleaning-obsessed, neat-freak character on the 90’s sitcom Friends).  This adult-like cleaning set comes with all the fixings required to give a home a good clean but sized perfectly for little hands.  This gift from his aunt and uncle are the perfect addition to his vacuum. 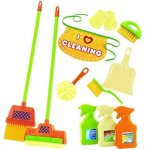 Santa spoiled the boys (and cashed in his Shopper’s Optimum points) with the Nintendo Wii.  Is it wrong that the grown-ups in the house have gotten just as much satisfaction from this gift as the kids?  I never thought that I would say “family time” equals “video game time” . . . but a little bowling and some Just Dance 4 is a guarantee for lots of laughs. 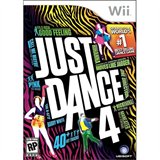 Story time is one of my favourite parts of the day with the boys.  We have two designated times during the day when we cuddle up and read: while the baby is napping and just before bed.

From my post yesterday, I am sure that you can surmise we have been reading a lot of pirate books lately.  Here are some suggestions that I am sure will be a hit with your little matey!

Grandma and The Pirates by Phoebe Gilman

I am such a fan of Phoebe Gilman.  Her talent as an author and illustrator shines from the first page of her books and instantly captivates her audience.  The boys love when I read them Jillian Jiggs and when Jillian’s mother passes out from the sight of Jillian’s messy room, I am guaranteed a giggle.

Grandma and The Pirates has been read nightly for the past few months.  My pirate-obsessed son can be heard reciting passages of the book long after the lights have been switched off.  I am waiting for Pirate Pearl to arrive in the mail which I am sure will be enjoyed as much as Gilman’s other works.

These fanciful stories are fun to read and most definitely appeal to imaginative kids.  David Shannon’s distinct illustrations give life to Captain Braidbread and Long’s repetitive chorus engage emergent readers (and those with a flair for theatrics!).

Pirates go to school too according to this silly rhyming book.  Swords and parrots along with funny looking clothes accompany this lot of young pirates to their school.

Mungo and The Picture Book Pirates by Timothy Knapman

This is actually a book about a book!  My friend Nathalie will love this!  Mungo is a pirate-loving boy who jumps into his favourite pirate storybook when the hero of the story takes a well-deserved break.  Initially, I thought the concept of the story would be beyond my four-year-old but not so.  This led to an interesting conversation about what books he would like to jump into.  Not surprising, Grandma and The Pirates topped the list.

Now I pose the question to you:  If you could jump into any book, which one would you choose?  I wouldn’t hesitate to jump into the pages of Little Women.

My son celebrated his birthday on April 1.  If ever there was a person more suited to sharing his birthday April Fools, I have yet to meet them.

My mostly vivacious, sometimes naughty and definitely charismatic son turned 4 and with it came a request to have a pirate themed party. And everyone had to dress-up.  Even the grandparents.

There are some great party blogs that offer advice on everything from frugal decorations to menu planning to easy-to-coordinate games.  Some of my favourites are:

The Hostess With The Mostess

Here are some pictures from the party.  Hopefully they serve as inspiration for your next ‘do.

A piñata stuffed with loot served as the centerpiece.  The boys had a great time smashing it open and collecting their booty!

I used an old wine bottle case as a treasure chest and stuffed it with costume jewelry and gold covered chocolates.  It made for a simple centerpiece on one of the tables.

It’s been years of kitchen disasters but I am happy to say that I am making progress.  These cupcakes are from a mix but I made the icing myself.  The pirate flags and cupcake wrappers are Wilton.

My sister-in-law who knows her way around the kitchen made these pirate cake-pops.  Check out the detail on the face and the cinnamon heart as the knot in the bandana.  I am waiting for her put her recipes together and make a cookbook or start a blog.

And my final effort was the pirate ship cake that I made for my little Captain.   It was surprisingly easy to make, cut up and serve.

What are some of your favourite party blogs?  With three kids, and a large extended family, there is always a reason to have a party.  Please share your go-to resources.