Do you see that blanket?  I made it.  The pattern is from Stitch ‘N Bitch, and I knit it over a period of four months, a little bit here and a little bit there, for my newborn.  (I put Sophie the Giraffe on it to give a sense of its size.)  I tried my hardest to keep a label to identify what wool it is, but I can’t find any now.  It’s a blend of baby alpaca and merino woool – beautifully soft.  It required four skeins and was expensive.  I love the colours and have been using the blanket everyday so I don’t regret the splurge in any way, but I just had to mention it to give this post an air of reality.

There is no equivalent for my two older boys, and I find myself inevitably attaching some symbolism to this blanket.   I can’t help but think of how far I’ve come since the birth of my first baby.  My transition to motherhood wasn’t particularly smooth.  I know there’s no “arrival” point for being a parent, but I’m much more comfortable in my mother skin, and it feels good. I’ll still relentlessly question most of what I’m doing since that’s how I’m made, but I do now know (better) what parenting approaches and lifestyle I believe in, and have even found a supportive community for it.  Tonight I was at my son’s school’s winter concert, and couldn’t help noticing how many handknits were peppered throughout the audience.  It is but a small point of contact, but again I saw it as a symbol.  I knew I was in an environment where the values of working with our hands, of respecting women’s craft, and of creative and sustainable living, were largely understood. 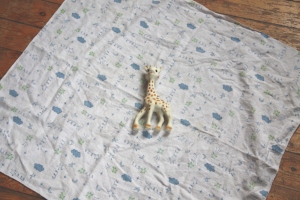 And yet as I took a celebratory photograph of my baby’s wool blanket, I felt compelled to capture another little blanket, because I feel like paying tribute to it too.  A square cotton receiving blanket, part of a little layette that my sister-in-law bought for me while I was in the hospital five years ago with my firstborn.  I had admitted myself because I couldn’t feel the baby moving, and was told that the placenta had partly abrupted.  After an emergency c-section birth, my premature son lay in an incubator in the neo-natal ICU on another floor in clothes donated by the hospital.

Neither my husband’s parents nor my mother were in the country, but I knew I still had support.  There were people who helped me in those early days, and I’d like to give a good-sized nod to a few of them.  I made a call to my brother, who then spent two hours doing consumer research online before appearing with a baby carseat and a lesson on how to use it.  My sister, who supplied food in the hospital and at home.  And my sister-in-law, for her help in buying me that layette, but especially, unforgettably, for seeing the terrifying birth process as evidence of strength rather than weakness in me.  “I told your brother,” she said, “that you saved that baby.”

And finally, I want to note that very new mother in me.  The professional who looked down at her four pound baby and wondered what on earth to do now.  In a culture that sometimes seems to feed off of the insecurity of mothers, I feel like telling that woman she’s okay.

Two blankets.  Two periods of time.  I value them both.