Nathalie
Hyperbole and a Half 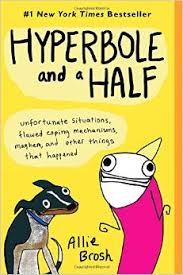 Run, don’t walk, to your nearest bookstore and buy this book.  Based on her blog of the same name, Hyperbole and a Half is best described as an illustrated memoir.  Some episodes are from her childhood, some are from adulthood.  Some of the chapters began as blog posts, others are new material for the book.  I read a review of the book in The Globe and Mail, and sat down to read her blog.  I read it from beginning to end in one day, from her celebration of hitting 100 subscribers, to her current multi-million hits a month.  I was riveted.  I have no doubt that reading the blog enriched my reading of the book, but the book is definitely a stand-alone knock-out.  Do not be fooled by the apparently naïve style of illustration.  Brosh has an uncanny ability to remember what it was like to be a child, and her visual style brings into relief her present self remembering her past self as a child, but also how her actions as a child inform her present behaviour.  (She has ADD and struggles with depression.)   As a parent, I found that I was fully absorbed by her memories of and explanations for her wild behaviour when she was younger.  This post about her dinosaur costume is brilliant.  At turns heart-breaking and hilarious (my husband had to check that I was not choking I was laughing so hard as I read the blog; I actually hurt myself trying not to laugh out loud while reading the book in bed and wake said husband), Brosh is at her best with her acute observations about the progress of depression through stages of apathy, lack of emotion and suicidal thoughts.  Here is a wonderful sample of a chapter of the book.
Longbourn by Jo Baker

With the exception of Helen Fielding’s Bridget Jones, I’ve been largely disappointed by attempts to rewrite/continue/reframe Jane Austen’s Pride and Prejudice.  I’m looking at you, Death Comes to Pemberley.  (I swore that I would go to my grave with the shameful secret that I sat through the entirety of Austenland.  It was so toe-curlingly dreadful, I actually felt soiled after that experience.)  I digress.  Longbourn is nothing like that.  Told from the perspective of the servants in the Bennet’s household, it is a story well-told and enjoyable.  I always, always wonder, when reading about the gentry, “How are they paying for this?  Who is doing the laundry?’  Longbourn addresses the second question in great detail, right down how the petticoats got stained, how the laundry soap is made and how the maid’s skin cracked and bled from chilblains.  This is fairly light fare: a below stairs romance that plays out with exactly the same times and settings as Austen’s original.  There were several points at which I felt my suspension of disbelief strained a bit too far, but overall, a good read.

Faraway Nearby by Rebecca Solnit

Solnit is my new Must Read Everything author.  I fell head over heels in love when I read Faraway Nearby, a book of connected essays about everything from cancer, to apricots to arctic explorers.  If that boggles your mind, wait until you see how Solnit weaves these things together, time and time again, with a different emphasis on each of her touchstone images in each chapter.   This is creative non-fiction at its best: it employs the tools of creative writing to maximum effect.  Beginning with an essay on caring for her ailing mother, Solnit voyages out as far as Iceland and then back home again in a series of nested essays that link up in wonderous ways.  It’s a book to savour, to take in slow bites rather than my customary gobbles, but, I could not help myself.  I gobbled.  Two of her other books now await me on the bedside table.

The Virgin Cure by Ami McKay

I enjoy historical fiction, if for nothing else a good story will pique my interest to further delve into the past.  A few months back my book club chose The Virgin Cure by Ami McKay who is well known for her novel, The Birth House that I thoroughly enjoyed.  Set in gritty, impoverished Lower Manhattan in 1871, The Virgin Cure grabs the reader from the first sentence: “I am Moth, a girl from the lowest part of Chrystie Street, born to a slum-house mystic and the man who broke her heart.”  Her childhood is spent barely surviving amid disease, starvation and crime.  On the cusp of her 12th birthday her mother sells Moth as a servant to an upper-class woman and disappears from her life.  Contrary to what one would think, life does not become easier for Moth and a series of betrayals leads her to a brothel where the Madam secures the maidenheads of young girls for the city’s tycoons.   It is at this brothel where Moth meets Dr. Sadie, a female physician, who changes her life.

The Middlesteins by Jami Attenberg

Well-established, New York author Jami Attenberg explores many complex relationships in her third novel, The Middlesteins.  Richard has walked-out on this thirty year marriage unable to take life with Edie.  Edie, morbidly overweight and scheduled for her second surgery, refuses to acknowledge her addiction.  The comfort food provides her is long-standing and the passages of Edie relishing her food, which Attenberg writes with such fervour, is akin to a passionate love affair.  Robin, her adult daughter, is grappling with her embarrassment of her mother, her mother’s weight and her parents’ failed marriage.  Benny, the lone son, is desperate to smooth things over while his relationships with his parents, his children and his wife all teeter on the brink of disastrous.  Edie’s addiction to food has torn the Middlesteins apart but with her family in jeopardy is she willing to take control of her life?  Attenberg shows readers how food addiction can be just as debilitating, destructive and complex as addition to drugs or alcohol.

I am Malala by Malala Yousafzai 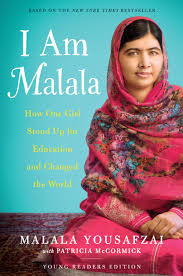 Unless you have been living under a rock, you know of Malala Yousafzai, the 15-year-old girl who was shot in the face by the Taliban on her way to school.  Malala, along with her father, is a champion of girls’ rights to education and is the youngest person to be nominated for a Nobel Peace Prize.  Malala grew up in the Swat Valley, an area with a contentious history, but life became a prison under the rule of the Taliban.  Freedoms and pleasures that the people of Swat enjoyed for many years were taken away.  Innocents were killed and their bodies displayed in the street as a warning to others.  The valley, once revered for it’s ecological beauty and ancient religious artifacts have to the profound dismay of many, including archeologists, been stripped of any sign of its diverse religious history and is a polluted shell of itself.  Malala’s first hand account of how oppressed people are, in particular women, under this terrorist regime, is both gripping and appalling.  I remember after 9/11 reading this quote by Fred Rogers:

“When I was a boy and I would see scary things in the news, my mother would say to me, “Look for the helpers. You will always find people who are helping.” To this day, especially in times of “disaster,” I remember my mother’s words and I am always comforted by realizing that there are still so many helpers – so many caring people in this world.”

Malala is one of those people.  She is a beacon of hope and an example to others how one person can change the world.

I read, I really do read, and I skim and glean even more.  But I don’t have much to write about this month, the books I picked up I don’t feel like posting about.  I did, however, forget to write about Quiet:  The Power of Introverts in a World that Can’t Stop Talking by Susan Cain.  It questions the dominant paradigm of extroversion in North America, the one which openly views introversion as a lesser way of being.  This is one of those books that doesn’t exactly change the way I see the world, but adds a screen of understanding that helps to make more sense of it.  And it doesn’t just do this for introverts, but for the extroverts who love introverts.  My extroverted husband picked up Quiet and said, “I feel like you come with a manual that I haven’t read.”  The book is filled with fascinating stories of individual introverts and their power, as well as the positive impacts of collected introversion.  It’s just as riveting on the ground where we stand, to facilitate an understanding of the quieter spouses, children, parents, friends, and selves among us.