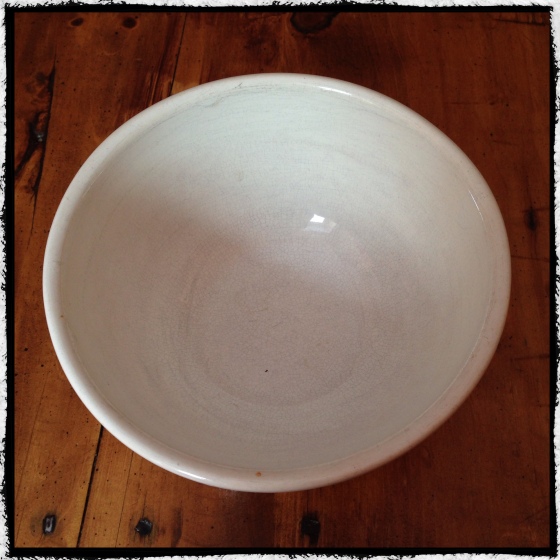 I can hear the sound of fireworks as I type–my neighbours out celebrating Queen Victoria and our fossilized connection to the English crown–but to me, nothing says England like a dinner of roast beef and Yorkshire pudding.

Although I grew up with a Canadian passport, England was the country that most felt like home because it was where we went between countries, on most holidays, and to live for some stretches of time.  My grandmother was in Yorkshire, my aunt in Bristol, and my parents had a house in Surrey for a few spells.  In all three homes, come Sundays, you would smell the roast in the oven and feel the excitement of a special day.  And in all three homes, a Sunday roast meant Yorkshire pudding.  My grandmother scorned the use of an electrical beater and would beat the batter by hand, and the sound of her rapidly mixing the batter is on the soundtrack of my childhood.

We made it two different ways, either as one large rectangular pudding in a baking tray or as individual puddings in muffin tins, but whichever way it was made it was always the most popular part of the meal.  Yorkshire pudding does not keep, but we never had to worry about leftovers because it was always devoured.  My brother, a notoriously fussy eater, could have lived on it.

When my grandmother died and we went back for the funeral, one of the few things my mother chose from the contents of the house was the ceramic bowl my grandmother used for making Yorkshire pudding.  It was an object that held so many memoires of family gatherings and good times.  It had magic in its years of use.

The fact of my mother’s having singled out such an ordinary thing to cherish from my grandmother’s house speaks volumes about the combined power of food and memory, the power of these things to connect us through generations and over oceans.

I now include Yorkshire pudding on the menu for my special dinners.  They are not the weekly Sunday staple of my childhood, but a highlight of holiday meals, and my boys are proudly carrying on the tradition of leaving no leftovers.  I’m now vegetarian, so I like mine served with the mushroom gravy and lentil walnut loaf from Oh, She Glows, roasted potatoes and a mountain of green beans, but anyway you make it, it’s a crowd-pleaser.  This is a good recipe from The Guardian, and I would add that it’s very important not to open the oven door during the cooking time, otherwise the puddings will sink.

Sound of the batter being beaten and the sizzle when it hit the pan, the smell of the roast out resting while the puddings cooked, and the last-minute frenzy to gather all of us and get the meal on the table–all of those sense memories are captured in this simple bowl.